A new exhibition at Hallie Ford Museum of Art (HFMA) celebrates 25 years of art from perhaps the only professional printmaking studio on a United States reservation community.

The Crow’s Shadow Institute of the Arts exhibition features 74 prints — landscape, abstract, portraiture, words and images — from its archive of Native and non-Native artists, all of whom have created art at the institute. Marie Watt ’90, Rick Bartow and Wendy Red Star are among 50 artists selected to appear in “Crow’s Shadow Institute of the Arts at 25.”

Oregon painter and printmaker James Lavadour founded the institute, which is located on the Confederated Tribes of the Umatilla Indian Reservation near Pendleton, Oregon. Since its opening in 1992, the institute has emerged as an important printmaking atelier, with many of its works included in exhibitions worldwide. This fall, the institute will receive the Governor’s Art Award, a recognition of individuals and organizations that have made significant contributions to the cultural life in Oregon.

Beyond the exhibition, HFMA has long supported the institute. Rebecca Dobkins, anthropology professor and an HFMA curator, started building a relationship with Lavadour and the institute in the late ‘90s, not long after she started teaching at Willamette.

As a result of her effort — as well as that of HFMA director John Olbrantz — the museum in 2012 became the official repository for the Crow’s Shadow archive, which holds examples of prints dating back to 2001. The museum also organized biennial exhibitions of Crow’s Shadow prints from 2006 to 2014 to regularly introduce renowned indigenous artists to a Willamette Valley audience.

“Like the museum,” Dobkins says, “the institute is a small organization attempting to do really big things.”

The relationship with Crow’s Shadow fits the museum’s dedication to the collection, preservation and exhibition of historic and contemporary American Indian art, as well as its emphasis on regional art.

HFMA has organized other events related to the new Crow’s Shadow exhibit, including a talk by heather ahtone, James T. Bialac associate curator of Native American and non-Western art at the University of Oklahoma, on Sept. 23 at 1 p.m. at Paulus Lecture Hall at the College of Law.

On the same day and location, a panel discussion including Watt and Lavadour will be held at 2:15 p.m.

The exhibition also highlights a new publication by HFMA that includes essays by Dobkins. 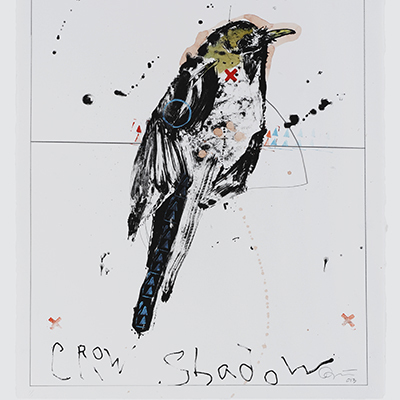